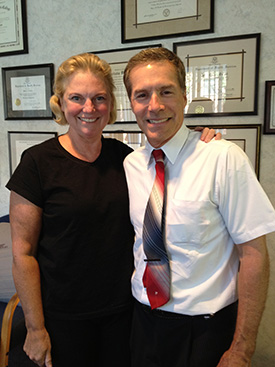 “It was April 2011 and I had been exercising pretty aggressively – Zumba, weight training, Pilates, and more for 2 to 3 hours a day – then I did something, my hip gave out, and subsequently my   back was intolerably painful.

The worst was the sciatica down both legs and centering on each buttock.  I went for an MRI to find I had three serious, herniated discs.  I understood the sciatica came from the herniated discs pressing on both the right and left nerves of my back.

I could NOT sleep past 3am as the pain was so severe no matter how I turned it was too painful. I often got up to take a hot bath or would lie on the floor with my legs up the wall just to get some relief.  I could not walk very far and would almost pass out from the pain at the grocery store. I could not carry even the lightest purse. Of course, I had no ability to exercise and I feared I would not be able to be active again.  I felt so old all of a sudden.

Almost everyone tried to convince me to go for surgery. The recommendations were for hip surgery as well as spinal surgery – and my knees were bad too.  It seemed I just had to replace the entire bottom half of myself!

My husband saw an ad showing Dr. Guerin demonstrating the use of a DRX9000 spinal decompression and I thought, “what do I have to lose?”  Dr. Guerin cautiously said I was a candidate, even though I had a length road to recovery.  He suggested we try the herniated discs first and he went one by one, over the course of two months.  After a short time, the pain was beginning to lessen and we would go to work on another disc.  I could feel we were making progress and was optimistic.

The sciatic pain disappeared and I could sleep through the night, stand up straight once again, and not fear that my legs would  give out.

Even though I knew I had made vast improvements and the DRX 9000 had worked, I wanted to see what the MRI would show.  I actually expected to see that I still had disc herniation despite feeling relief.  I was amazed when the MRI stated: ‘Previously described L2/L3, L5/S1 and L4/L5…NOT EVIDENT ON PRESENT STUDY,’

Proof it actually did work – The three discs were no longer herniated!”

Dr. Guerin has brought the DRX9000 spinal decompression system to Westport, CT.  The DRX9000 is a non-surgical treatment for chronic low back pain, leg pain, disc pain, and hip pain as well as numbness, tingling, and weakness.  The DRX9000 is a state-of-the-art technology used to treat degenerative disc disease, bulging or herniated discs, stenosis, arthritis and facet syndrome.

The DRX9000 gently and pleasantly decompresses the discs in the spine, alleviating pressure on the painful nerves.  The protocol for each condition and patient is highly personalized.  The process of decompression permits discs to reposition
themselves and also allows fluid return to the damaged areas so that they become
healthy and pain free again.  Patients are extremely comfortable during the treatments and listen to soft music, drift off to sleep, or even watch a movie during the treatment session.

Dr. Guerin states, “I have been treating patients with DRX9000 spinal decompression for several years.  I have seen many patients recover from disc herniation, degenerative disc disease, chronic low back pain, and stenosis when all else has failed.  I strongly recommend that anyone with these conditions have a consultation to see if this approach is right for them before considering surgery.” 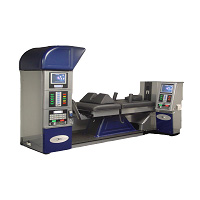 BE ONE OF THE FIRST 20 PATIENTS AND GET 2 FREE VISITS!

Here’s what to do now:

Due to the expected demand for this treatment, I suggest contacting  my office at once.

Find us on the map